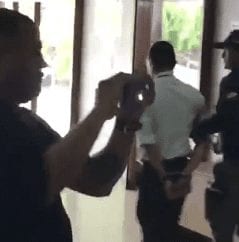 HAVANA TIMES – The owner and a manager of a supermarket chain were arrested Wednesday by police in Venezuela after they were accused of violating prices of basic goods that had been fixed as part of President Nicolas Maduro’s set of economic measures, which were put into action this week to revive Venezuela’s strangled economy, dpa news agency reported.

Referring to these arrests, Maduro pointed out that government authorities had discovered that prices had been outrageously marked up. “Why are they doing this? There are fair, agreed prices, which we are going to maintain. Making a living off speculation, off stealing is going to end, it has to end,” he said at a meeting at the presidential palace with pro-government union leaders.

Before him, Minister of Interior, Nestor Reverol, announced that the manager and vice-manager of the Plan Suarez chain had been arrested, after neighbors had complained about an alleged “speculative hike-up of prices against the people.”

He said that a special police unit, the Chief Prosecutor’s Office and National Superintendent for the Defense of Socio-economic Rights (SUNDDE) had carried out an operation to verify this supermarket’s prices, where they confirmed that prices had been allegedly marked up by 200%.

“Plus, the supermarket had food hoarded up and didn’t have invoices to justify these prices to the public. Sanctions will be applied to every establishment that doesn’t comply with prices stipulated by the Government,” he announced.

These are the first business people to be arrested after the Government issued a price list that fixed prices of 25 basic consumer goods, as part of its economic plan that kicked off this week with a currency revaluation which knocked five zeros off the national currency and put a new family of notes into circulation.

Chief Prosecutor, Tarek William Saab, announced that he had assigned 68 national prosecutors, who are experts in financial crime, to receive complaints about a failure to comply with this price list and remarking prices.

The commission has been created to receive complaints against business owners who violate these regulations, after the currency revaluation has been put into effect, taking five zeros off the strong bolivar to create the sovereign bolivar. According to the new value, one USD is the equivalent of 60 sovereign bolivars.

“Enough of remarking prices; we are fed up of this happening,” Saab said.

“We are seeking justice and equality… Oligarchs, respect the plan and everything will go smoothly because this recovery plan will happen by hook or by crook,” Maduro warned.

National opposition groups have criticized the measures, which include jacking up gasoline prices to international rates, increasing taxes and drastically increasing the national minimum wage, from 50 to 1800 sovereign bolivars (30 USD).

Former presidential candidate from the opposition, Henri Falcon, pointed out that no economic program that “persecutes and strangles private enterprise can be successful.” “Today, the government has published a list of prices and controls which will only lead to more shortages and speculation,” he wrote on Twitter.

On Tuesday, the opposition held a one-day strike to protest these economic measures, which they have baptized the “Madurazo”.